The History of Pickleball

(from the USAPA brochure) 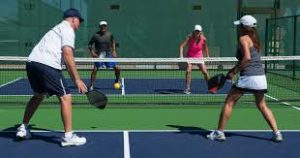 Created in 1965, Pickleball began in Washington State (Bainbridge Island) in the backyard of former U.S. Rep. Joel Pritchard.  After a day of golf, Pritchard returned home in search of a more family-friendly game.  With makeshift paddles in hand, he and a firend began batting around a perforated plastic ball.  Rules were set, and after a few weeks, “pickleball” was born.

Today, there are over 7,000 places to play Pickleball in North America alone which is quadruple the number of places that were available in 2010.  For the past 6 years, Pickleball has been the fastest growing sport in the US.  Popularity for the sport also continues to grow worldwide with many new international clubs forming and national governing bodies  now established in Canada, Europe and Asia.

The USAPA is the best source for Pickleball, providing both its members and the general public with a wealth of Pickleball information including: